Ihringen at the Kaiserstuhl

During the year 962 already, viniculture was exercised in Ihringen and by that time, the town already was a wine commune. The first documentary reference also dates from this year. Being an important strategic point thanks to its proximity with the French border, the commune has often been involved in armed conflicts. At the beginning of the 19th century and after its affiliation to the margraviate Baden-Durlach, the commune evolved into a blooming municipal system. During the year 1974, in the course of a municipal reform, Wasenweiler was affiliated as a district of Ihringen. Worth seeing are the Stockbrunnen and the Protestant parish church with its valuable window pictures of Valentin Feuerstein. The contain pictures of the Old and New Testament: the allegory of the workers in the vineyards among others. Guided tour and visit upon request.

The first documentary reference of Wasenweiler dates back to the year 1000 AD. In spite of its close proximity to Ihringen, the historical development and territorial belonging of Wasenweiler, took a different course for a long time. Historical buildings like the old vicarage, an ancient moated castle as well as an arthistorical significant chapel. The St. Vituskapelle hides a veritable artistic treasure. A large than life painting adorns the apostles and over 20 pictures show the life history of St. Vitus.

The judgment of Solomon on Ihringen

It is said that during the year 1500, the farmers of Ihringen have passed a foolish judgment, when the ass of a miller escaped in a vineyard and ate a bunch of grapes. The owner of the vineyard thus went to court, where the judges recognized that in so far as it was proved that the ass had eaten the grapes while lying down, the miller would have to pay for it. But if the ass had not sit down in the vineyard, but merely tasted the grapes while passing by, it would be considered as an honor drink. The complainant and his descendants were thus committed to investigate, as they could not prove whether the ass had sit or lain down, or how he ate the grapes. On different occasions it is possible to discover the play created for this legal decision. (Wine days of Ihringen) 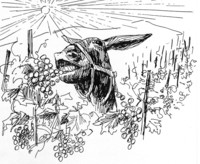 The history of the Lilienhof

The land around the Lilienhof is a very old settling area and farmland. Findings of old billhooks and donkey horseshoes show that the land was already cultivated during the Middle Ages. It is assumed that the wooded areas regrew during the Thirty Years War due to the high depopulation. In the middle of the 19th century the association of tobacco products and business of Baden began to change the newly formed woods into an agricultural area. The agricultural engineer Freiherr von Babo made a significant contribution to the re-cultivation of the area. He established on behalf of the Graf Bismarck the property of the Lilienhof with its 280ha of agricultural lands. The farm estate earned a good reputation in Germany during the 19th century as a stud and wine-growing estate. In 1075 it was stopped due to economic reasons and the whole land was sold to the state forest management. The afforestation through the Forest Research Institute was the beginning of the Liliental as it is today.

There are many theories from where the Kaiserstuhl (literally: the Emperor’s chair) has its name : some think that its shape ressembles that of a throne. Others say that an emperor once had a throne, then he was given a chair and since then the Kaiserstuhl is named the Emperor's chair. Still others think that the emperor found the region so beautiful that, he had a chair built 'the Emperor's chair' in order to rest.

The name "Kaiserstuhl" is believed to refer to King Otto III who held court near Sasbach on December 22, 994. Since then the whole mountain range was called “Königsstuhl” – the King’s chair. In May 996 Otto III was crowned Emperor and the King’s chair became the Emperor’s chair – “Kaiserstuhl”.